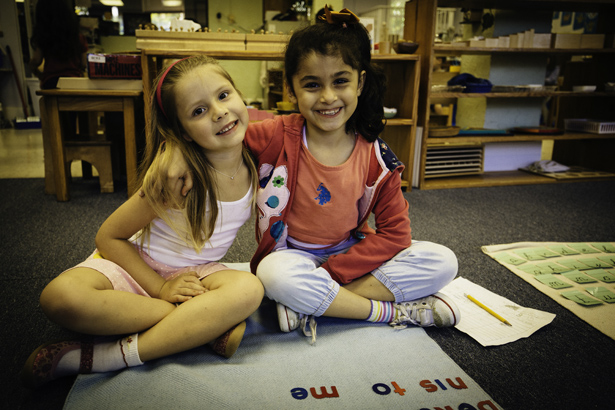 What we need is a world full of miracles, like the miracle of seeing the young child seeking work and independence, and manifesting a wealth of enthusiasm and love.

At the Montessori School of Pensacola:

Our Early Childhood Program Director, Kathy Turtle, and her friend Karen Leavesley started Montessori Early School as a small preschool facility in January 1977 with the Sand Dollar as their symbol. They both had trained in the Montessori Method and had worked in education for many years and decided to open their own facility. They soon outgrew their surroundings and rented a church fellowship hall on Stumpfield Road in August 1977. After taking Montessori training in the summer of 1978, Mary Gaudet (our current Administrator) enrolled her youngest son in the program in August 1978 and began volunteering for Kathy and Karen. But soon, they were on the move again. August of 1979 saw the school moving into a location on Lillian Highway.

In 1980, Karen moved to Tallahassee and Maria Mitkevicius (Currently Head of Elementary and Middle Schools) joined the faculty. Our current ownership was complete when Montessori Early School was incorporated in March 1981 with Kathy, Maria and Mary as officers.

In 1986, we were in one location at Jamison St. and had an enrollment of 43 students. We added first grade that year. Each successive year we added one grade until we reached 8th grade. In the 1992-93 school year, we added our second location (12th Ave.) with a 3-6 classroom, and an Elementary classroom (Grades 1-4) to bring our enrollment to 90. The following school year, enrollment increased to 161 as we added 5th grade and a Toddler/Entry class at Jamison. In 1995-1996, our enrollment jumped to 222 as we added a Toddler/Entry class at 12th Ave. In 1996, we added our third location at Montessori Dr. We opened up a 3-6 classroom, and moved half of the 6-9 class, the 9-12 class and Middle school to that location. In 1999, we opened the Moreno St. Infant Toddler program.

In September 2004, Hurricane Ivan precipitated several changes to our classrooms. One of the buildings used to house our 6-9 classroom on 12th Ave. was severely damaged. That class was moved to a temporary location also located in the Tower East building on 12th Avenue. This class was subsequently moved to our Montessori Dr. location. Now re-vamped, the old 6-9 classroom is in use by one of our preschool classes.

One of the goals of the school was to have all of the Elementary classes on one campus. To achieve this, a new building was constructed at Montessori Dr in 2006. This new building housed the Middle School. In 2008, the Media Center was completed, providing a centrally located library for the school, as well as a conference room, teaching kitchen, and computer lab with laptops. In 2011, MSP purchased property that was formerly part of the Pensacola Racquet Club. This brought about the move of the Middle School and Upper Elementary classroom to a newly renovated building on that property, as well as the addition of tennis courts. The renovations included a brand-new science lab and art room. In August of 2013, additional building was completed on this property

January 2017 marked the 40th anniversary of MSP. Today, MSP is a thriving school at 2 locations. The school has been through many changes. As we look to the future, we will continue in our evolutionary process, which will bring us closer in meeting our ultimate commitment to the education of children. We thank all of those who are part of the history and the future of the Montessori School of Pensacola.

Click here for an article about the history of the school.

The Montessori School of Pensacola